Halloween was sort of a bust this year for us.
I planned to have a Halloween party for the neighborhood, and solicited volunteers in our neighborhood newsletter and through email, but only a couple of people replied that they could help. So I ended up planning, buying, and building for this party for pretty much the two straight weeks before Halloween. It took over my life and I was so glad just to get it over with.
I have no pictures of the actual event because I was running around the whole time, but lots of people came and it ended up turning out okay.
This is my kitchen before the party, but most of the stuff was already packed up. 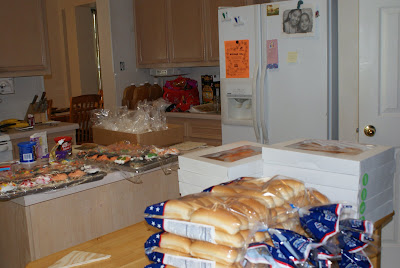 Because of all this party planning business, we put off carving pumpkins with the kids until the day before Halloween. This was okay because we learned the first year that we moved to Texas that if you carve them too early they will mold and collapse before the big day. However, Dario Jr. had a birthday party to go to that day, and we were going to carve pumpkins after that, but then big Dario got held up at an appointment and wasn't going to make it home until after I had to leave for my class that night,(community college-whole 'nother story), so instead of carving the pumpkins with the kids myself, I had to scramble to find someone to watch my kids until Dario got home. I called a million people before I found someone who could help. By the time I found a babysitter, it was time for me to leave. So Dario carved pumpkins with the kids when he got home. He was tired and grumpy, and it wasn't the fun it should've been. (He said.) I was upset that I hadn't gotten to do that with my kids, and anxious to see the pictures of Gabby, Dario, and Roman digging out the pumpkin guts. So I turned on my camera and this is what I saw.

Dario had taken lots of pictures, but the memory card wasn't in the camera. So disappointing.

So I missed that, but the next day was Halloween and we were going to have fun then. The party was over with and we were ready to just enjoy the holiday. But at 4:30am on Halloween morning, Dario Jr. came into my room feeling sick, and he ended up vomiting the whole morning. He had to miss school, where he was going to get to dress up as a storybook character and share a book with his class. I was supposed to go to a Halloween lunch with friends, but couldn't because I needed to stay home with Dario. And of course Dario Jr. and I then missed the Trunk-or-Treat party at church, because we definitely did not want to spread that around. What a bummer.

So big Dario took Gabby and Roman. Here they are in their costumes. Dario Jr. didn't feel well enough to even put on his costume. (We did end up putting pants on Roman by the way. Oh, and yes that was Dario's costume from last year or the year before that or something. Again, because of the neighborhood party planning we didn't find him an original costume this year.) 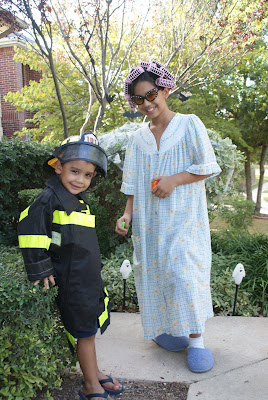 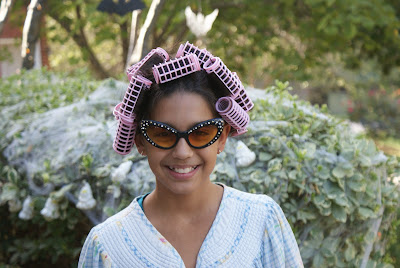 Little Dario and I set up a table in the driveway with leftovers from the neighborhood party. We had cookies and stuff to decorate them, cupcakes, and apple cider for the trick-or-treaters. We pulled out the back seat of my van and set a scarecrow on it, and surrounded that with hay bales and pumpkins for decoration. We turned on some Halloween music and sat next to the scarecrow and gave out treats to the trick-or-treaters. Again, no pictures, and no good excuses this time. But here he is trying to look happy while I am setting up. 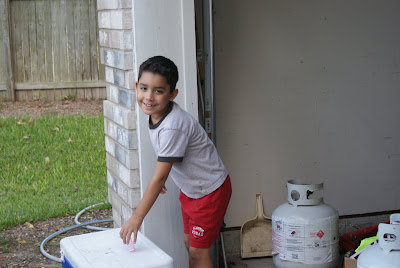 Here are the pumpkins the kids carved with Dario. They took them to the Trunk-or-Treat. It just occurred to me how appropriate it was that we had one vomiting pumpkin. 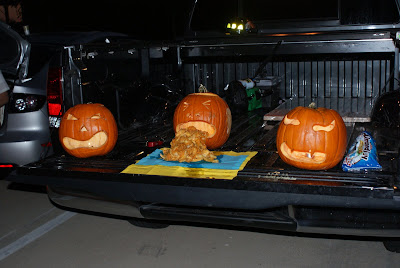 When Dario got home with the other kids, little Dario slipped on his costume and went with them for a couple of blocks of trick-or-treating, but pretty soon his stomach was hurting again and they came home. This is the only picture we got of him. He was a ninja. He had a mask and hood and weapons, but didn't use them. 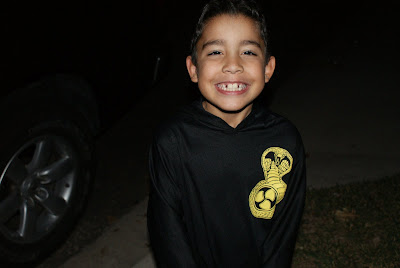 So that was our Halloween. Bleh. I'm glad it's over.

Glad to see you are back to blogging again. :-) Too bad you didn't have a happier story to share! :-(

I hope things return to calm at your house and that Dario Jr. gets feeling totally better.

Well, Hello Stranger!
When I saw the 1st picture, I thought is she opening a bakery???

You've had a crazy time, you can call me to watch your kids if you ever need a sitter. I'll feed them all sorts of good things like chocolate ice cream and cookies. But I will make sure they are safe and stay alive. Really can you ask anything more from a sitter???

What a great start to the fall holiday season :) Hopefully it will get better! It sounds like you still had fun, so that's great. Keep smiling :)

Wow! Way to go on the nieghborhood party in spite of everything else going on! And poor Dario, it is a bummer to miss out on holiday festivities!

I keep checking back to your blog, hoping for something new cuz I love your posts. I'm craving one. Guess I'll have to keep checking. It would be nice to find a suprise one of these times! : )

What??? Still no post. I thought after last night you would have gone straight home and shared how your wonderful talent went down. I know I thoroughly enjoyed it! You guys are a great family!

these costumes oddly enough look just like last years!?!? how could that be? :) happy halloween!

Your blog keeps getting better and better! Your older articles are not as good as newer ones you have a lot more creativity and originality now keep it up!