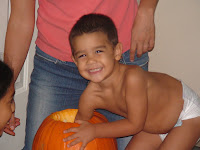 Last night we carved pumpkins for Halloween. We did it earlier last year and found out that in Texas with the heat and humidity that that isn't the best idea. Our pumpkins had rotted and caved in by Halloween and it was such a bummer. So this year we wised up and waited, and it worked out doubly well because we were able to get gi-normous pumpkins from HEB for the same price as the little ones because they went on sale so close to the holiday. Yay! Roman had to stick his entire arm in up to his shoulder to pull out the guts at the bottom of his pumpkin. So cute! Little Dario was so pumped to carve pumpkins, but I guess he forgot what that actually entailed, because once again this year he didn't want anything to do with touching slimy stuff, so he wouldn't gut his pumpkin. Come ON! That's the funnerest part! He also is too young to carve it, so he basically sat on the stairs the whole time asking if we were almost done. Hopefully next year he'll "man up" a little and at least touch some guts. Gabby wanted to do her own pattern, and she refused to draw it on the pumpkin before she carved it, so she ended up with a really lop-sided grin on hers, but she told us, "I meant it to be that way." I love her independence. (sometimes!) So we all had fun and can't wait for Halloween tomorrow. 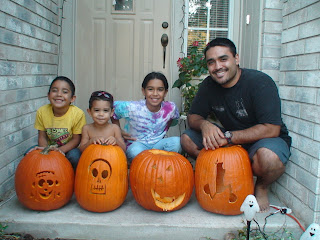 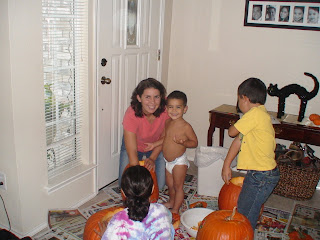 I had such a nice day planned today. Roman was going to go play at a friend's house from 9am-noon and I was going to have 3 whole hours to myself to do whatever I wanted to do without interruption. But then the first law of motherhood, which reads, "Thou shalt no more have peace or solitude in thy life until thy youngest child moveth out" kicked in, and I ended up with not just 1 naughty toddler at home, but also a "sick" 8 year old daughter. I say "sick", because by the time lunch rolled around and the boredom of being in her room with nothing to do but read sunk in, she was suddenly all better.

The downhill slide of my day started yesterday when I saw Roman scratching his back like crazy and I asked him if he wanted me to scratch it for him. I lifted up his shirt to get a better scratch and saw a big raised area on his back with red bumps and what looked like a little blister. I've been getting notes home from the elementary school that have warned that there have been several staph infections reported lately, so I figured I better get him checked out. I took him to the doctor today and he does indeed have a bacterial infection, although it's not staph.

Then this morning Gabby started complaining that her throat hurt and her stomach hurt. She was coughing as well, but the coughing has been going on a while. I gave her some cold medicine which she refused to drink, and went to put some clothes in the wash. When I came back into the kitchen she was hovering over the garbage can and said she felt like throwing up. So I sent her back to bed. Now, as of lunch time, she's completely recovered. I don't know if she was faking or not (she swears she felt horrible this morning), but I am definitely suspicious. It reminds me of when I didn't want to go to school a couple of times and I set my alarm to wake me up early so I could go into the bathroom closest to my parents bedroom, turn the lights on, make a little noise so hopefully they'd wake up enough to hear me in there, and then flush the toilet and tell them I puked. Worked like a charm, and I didn't use it often enough to arouse suspicion. Gabby's a pretty smart cookie. Maybe she's starting early.
Posted by Sheyenne at 12:49 PM 1 comment: 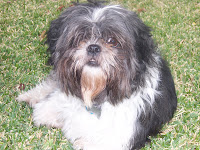 It's Sunday morning and I'm really tired. Tired because I stayed up really late last night and got up early this morning to go look for my dog Chester. He's usually just around the house and I don't notice him much when I'm busy, and yesterday was extra busy getting ready for Trunk-or-Treat, so I didn't even notice until I went to bed around midnight that he wasn't there. He always comes to bed when we do. So I looked all over the house and couldn't find him. I went outside and called for him and he didn't come. I tried to go back to bed but I was so worried that I decided to get up and go drive around the neighborhood looking for him. I was surprised at HOW worried I was. He's a little dog and it was cold outside, and all kinds of scenarios went running through my head. I thought for sure someone stole him because he has tags clearly labeled with our contact information and no one had called. (I checked the caller ID for when we were gone). I was worried that he got run over. I thought maybe he went wandering too far away from our house in a quest to pee on something new that he got hopelessly lost and finally just collapsed from being so tired. (This would happen about 6 blocks away probably because he's such a chub!) I even let my mind go so far as thinking he may have been kidnapped by someone planning to break into our home who didn't want a dog barking to alert us. I thought maybe I should sleep in the hallway to protect the kids' rooms. (Yes, I am fully aware how paranoid and crazy this sounds.) I didn't find him so I stayed up gathering up pictures for the "Lost Dog" posters I was going to make, contacting the homeowner's association lady to have her send out a "Lost Dog" email, and looking up information for the animal shelter so I could go check there. I think I finally went to bed around 1am. Then I woke up this morning early to go search some more. I took Gabby with me and we circled the neighborhood and checked the drainage ditch and all the gutter holes along the streets in case he fell in. When we circled back by our house to check the gutter there and called out for him we heard him barking. Then Gabby yelled out, "He's in the car!" Stinkin' dog was in Dario's Durango all night long! I looked in the windows last night and called for him and he didn't respond, so he must have been sleeping. Gosh darn dog! How he got in there I have no idea, but he's found, and he's had more biscuits and love today than he's had in a long time. He really is my baby. I can't imagine what people who have lost an actual child go through....
Posted by Sheyenne at 10:04 AM 2 comments:

Okay, so I'm having fun reading a couple of other people's blogs, and decided to try this out for myself. But I feel such immense pressure to say something witty/entertaining/funny that I really don't even know what to write!

I'll start with this evening I guess. We went to our ward's Trunk-or-Treat party. Roman was dressed like a skunk, Dario Jr. was a fireman AGAIN because we haven't put together his REAL costume(and hopefully I do before Halloween), and Gabby was an old lady, which was quite hilarious as she swung her little purse around screaming in her best grumpy old lady voice "Get off my lawn!" I made Roman's costume myself, the poor thing. It consisted of a black hoodie and sweatpants, with a strip of fuzzy white fur pinned down the hood to the back, and a fluffy beaver shaped tail that I actually hand-sewed with the one stitch I know how to sew. The funniest part is that to get the tail to stand up, there's a long white string tied from his hood to the top of the tail. Online, where I found this idea, it said to use nylon string(so you can't see it is my guess), but by the time I got to the part where you attach the string, I was done putting extra effort in, and I just used the white that we had, and it's just as obvious as can be. Oh well, as long as people give him candy, he's happy. Which means I'M happy, because when he goes to bed I raid his pail. Dario and Gabby are too smart for that. They took their candy buckets into their rooms with them. Darn kids....
Posted by Sheyenne at 10:02 PM No comments: