It's the principle of the thing

I received this check in the mail the other day. It took a lot of time, energy, and frustration to get this check, and even though it turns out to be less than minimum wage, when I pulled it out of the envelope I was very happy. 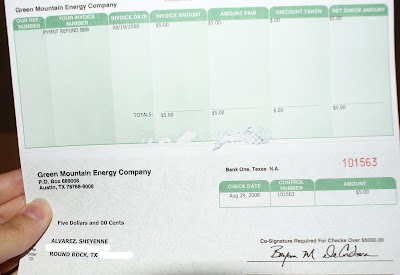 It's difficult to see, but on the top green portion it says "PYMNT REFUND BBB". The "BBB" stands for Better Business Bureau, which is one of the parties I had to contact in order to get this five dollars. In fact, I made 4 phone calls and wrote 2 letters to secure this measly payment. But it was worth it in my mind, because of the principle of the thing.

Long story short- When I ended my service with Green Mountain Energy to switch to another less expensive (but still green), power company, they sent me a final bill. At the bottom of the bill it said in big bold letters, "DO NOT PAY THIS INVOICE". It said that because I was set up on an automatic payment plan, and had all payments charged each month to my credit card. I was surprised some time later with a call from a collection agency, which Green Mountain had turned me over to for nonpayment of my final bill. They threatened me with damaged credit if I didn't immediately pay by phone, and also pay their $5 pay-by-phone fee. After contacting Green Mountain, and speaking to a representative and a supervisor, and being told "too bad", in so many words, even after they acknowledged that a mistake was made on their part, I got really mad. It was only $5 extra that I was asked to pay, and it didn't hurt me financially in any way, but I am so darn tired of lousy service everywhere I turn that I decided to do something about it. So I wrote to the Better Business Bureau. And then I wrote to the Public Utility Commission of Texas. I spent time, effort, and postage because I was that ticked off. And apparently that's what it takes to get these people's attention, because lo and behold, here's my $5 check. And I will cash it with glee.

Way to stick it to the man! Tell me what company I should go with! My contract ends in like six months and I will be free!

Sheyenne, you are my kind of woman.

Nothing better than a woman making her point and getting things done!

$5 is $5, man you could buy a gallon of milk, or a gallon of gas, and still have enough left over for a candy bar.

Only you would Sheyenne would do something like that.
Your so funny!!