Yesterday was Roman's birthday. We kept it simple. In the morning we took all the kids to Texas Jumping Beans, which is an inflatable toy place. Then Roman got to pick what he wanted for lunch, which was *suprise!* chicken nuggets from McDonald's. After they were worn out and fed full of grease, we came home and Roman helped me decorate his birthday cake. We sang "Happy Birthday" and gave him his gift, which was a "Little Einsteins" playset with the rocket ship and 4 characters. He loves it and has been playing non-stop since he got it yesterday. And suddenly Dario Jr. is all about playing with him (with the new rocket of course.) But Roman's happy, so Dario can use him for his toys all he wants as far as I care! 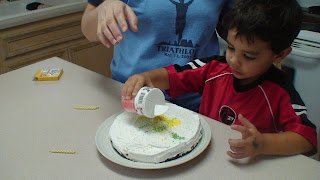 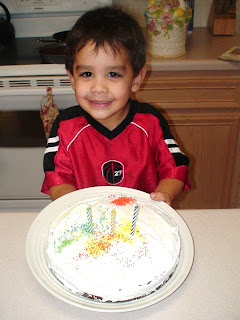 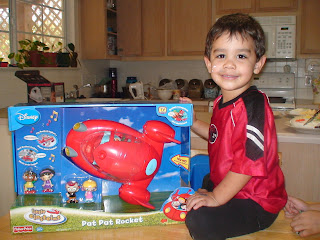 3 Reason I love you, Roman

You give me as many hugs and kisses as I want. And good ones too. You hold on long and tight and snuggle and rub and caress and rub noses with me.

You love to be with me, even if it's just doing the dishes or sitting next to me on the couch watching cartoons.

Your smile. It can be happy, or hammy, or shy, but it's always sweet.

I love you, Roman.

Been catching up on your blog which I haven't seen for quite some time, but I've found it again and hope you don't mind that I've added you to my list of favorite blogs so I can keep up more regularly. You seriously make me laugh. I LOVE your blog. Thanks for sharing and making me smile today!
And by-the-way, happy birthday to Roman!

Hi Kim! Thanks for the compliments. Of course you are welcome to read! Glad to see you here!