The high and low of my day. Free Ben and Jerry's ice cream! Yay! I took the kids after school and we all sat outside in the beautiful weather and ate our treats. I had cheesecake brownie, which was not as good as I had hoped, but hey, cheesecake and brownies even in a not-as-good-as-I-had-hoped-kind-of-way is still pretty darn good.
There were a ton of people there and some 20-ish looking girls came and stood on the stairs out front where little Dario had been sliding down the rail as the rest of us finished our ice cream. They started up a conversation and it must have interested him because he got off the rail and actually stood right there in their little circle and stared at them as they talked, until I finally pulled him away.


After getting ice cream we headed over to the library to check out some books and movies. While we were there Roman had to go to the bathroom. (Hallelujah he's finally potty-trained!) So we went into the restroom and squeezed into one of their tiny stalls, since the larger handicapped one was being used. He did his thing and then needed help to pull up his underwear, so I squatted down to help him and the darn automatic toilet went off just as I bent down. I hate those things. They're always going off at the wrong time and sucking the toilet seat cover down, or giving me the bidet-effect, or, today, spraying me in the face! I've kindly drawn you an artistic re-creation of the horrid event: 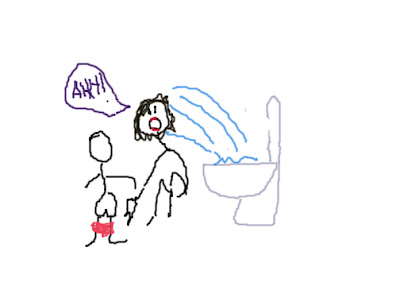 And yes, his real-life butt cheeks really are that cute.

We went to Jamaica a year ago for spring break and my wife heard this in the Kingston Airport bathroom:
http://earlvickie.blogspot.com/2007/04/over-heard-by-vickie-in-womens-bathroom.html

Congratulations on the potty training success!!

LOl, that is the funniest thing that you would draw a picture of it. Love it. I don't really like using public restrooms, I don't know who does, but I find it way worse when one of my kids needs to use one.