When Roman was born more than 3 years ago, a friend from my ward sewed him a baby blanket. It is yellow on one side and white with pastel alphabet letters on the other. Or, it used to be. Roman has loved it and carried it around with him every day of his life. He uses it at night to snuggle and he rubs one corner against his nose while he sucks his thumb. After 3 years, it's hella nasty, and looks disgusting even straight out of the wash, but oh how he loves it. 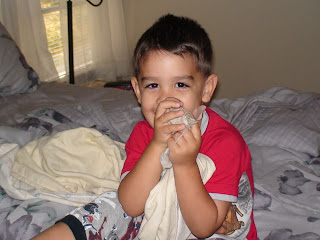 This is his favorite corner of the blanket. What caused him to actually pick a favorite corner, I do not know, but now it's obvious which one it is. He actually rubbed it so much that it wore right through. Now we just call his little snuggle routine "rubbin' corner"- as in, "Hey Roman, do you want to go to bed and rub some corner?" or if you see him snuggling his blanket and ask him what he's doing he'll say, "Rubbin' corner." 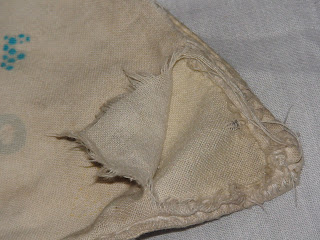 It's cute that he has a lovey.
Posted by Sheyenne at 8:43 PM

We read a children's book yesterday in Sun Beams that had a similar blanky in it. The parents tried putting vinegar on the favorite corner, but the kid just buried the blanket in the sand, rubbed it around, and chose a new corner (the parents wanted him to get rid of the blanky because he was starting school).

So when I read this post, I just thought how true to life that story was. Though it doesn't sound like there's any reason you need to try vinegar or make handkerchiefs (seems kind of mean to me - I still remember my blanky, which was a snoopy sleeping bag). No need to take Roman's "lovey" away, right?

Our neice had a blanket like that when she was three - she had a favorit corner that she would stick UP her nose :) She grew out of it eventually. But she was so funny - she used to offer it up to her best buddies "Corner?"