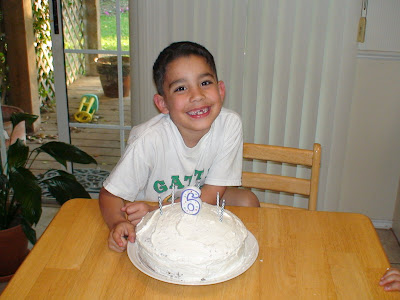 Yesterday was little Dario's 6th birthday. We kept it pretty low-key, and it was just a nice relaxing day. I had set out Dario's gift on the kitchen table so he would see it when he got home, but when he arrived from school he stopped by the door and asked me if we had gotten him a present. Since he hadn't seen it yet I thought I'd mess with him a little.

I said, "No, that's just for friends to do at parties."

"No, I told you. That's just just for friends to do at parties."

"Well, I just didn't really feel like it. Maybe next time."

That was fun, and I could have gone on with it for a while, but then Gabby came in and asked him if he had opened his gift yet. (She had already gone into the kitchen.) Darn it!

We let Dario open his gift, which was a couple of remote control bumper cars that you try to ram them into buttons they each have on the sides of the cars and when you hit a button the driver screams and is ejected from the car. He liked it, but unfortunately so did Roman, who has spent a lot of time screaming that he wants it and that it's his turn.

After he opened his gift and played for a while, we all went to the movies and watched "The Spiderwick Chronicles", which was good, but I had no idea there would be so many scary goblins and ogres trying to do bodily harm to nice people. I expected at least one, if not two, little boys creeping into my room last night, and I was right. Roman did come in.

When we got home the kids played bumper cars some more and jumped on the trampoline, and then we lit the candles on Dario's cake and sang "Happy Birthday". (If you're wondering if I skipped writing about dinner because that's boring, no need to wonder. Dinner was popcorn and candy at the theater. I'm such a good mom.) We used trick candles on the cake, and Dario told little Dario that if he could blow out all his candles on the first try we'd give him $20. He was excited about that prospect, and both Dario and I were very worried we'd actually have to pay out when we lit the candles and there were no tell-tale sparks coming from them. But it seems that trick candles have come a long way since I was a kid, and they no longer pop and sizzle when you light them. He blew them all out multiple times and they just lit right back up. It was quite entertaining. Little Dario had never seen them before so he had absolutely no idea what was going on. It was pretty funny and I got it all on video. And maybe someday I'll actually get it added onto this post, but for now I've given up trying. (I actually wrote this post last night and fell asleep while Dario was trying to figure out how to get the video edited.)
I asked Dario what the best part about being six was, and he said, "I'm almost 8 so I can be baptized, and I get to be the same age as some of my friends." Sounds pretty good to me. Happy Birthday Monkey Mank!

That is a great picture of little Dario! Looks like he had a very happy birthday.

What a fun birthday! And thanks for reminding me about the Spiderwick Chronicles, I wanted to take the kids to it but I had no idea it was out.

What a fun birthday! And thanks for reminding me about the Spiderwick Chronicles, I wanted to take the kids to it but I had no idea it was out.