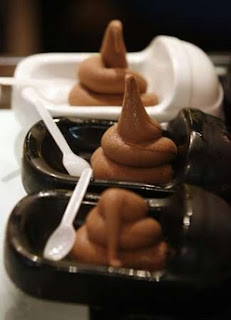 Ice-cream shaped like faeces is ready to be served at the Modern Toilet diner in the Shilin district in Taipei November 9, 2007. All 100 seats in the crowded diner are made from toilet bowls, not chairs. Sink faucets and gender-coded "WC" signs appear throughout the three-storey facility, one of 12 in an island-wide chain of eateries with a toilet theme. Picture taken November 9, 2007. REUTERS/Nicky Loh (TAIWAN)


As ridiculous and disgusting as this is, I'm quite sure I'd like to go there. Just to be able to take pictures and talk about it later. And I guess this is China, so if people only go one time for the novelty of it, you'd still never run out of customers.

I wonder if they serve Mountain Dew in toilet shaped cups too? I'm lickin' my lips just thinking about it. Aren't you?
Posted by Sheyenne at 10:13 AM