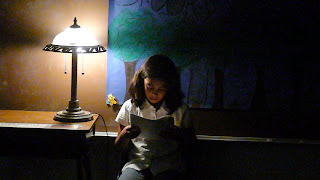 Yesterday was Halloween. It was a really busy day, but SO much fun. Roman and I went to Gabriella's school to hear her and her classmates read spooky stories that they had written. The teacher turned the lights out and the kids sat next to a lamp and read their stories. It was really cute.
Later on it was time to trick-or-treat. Roman was a skunk, Dario dressed as Frankenstein, and Gabriella was an old lady. 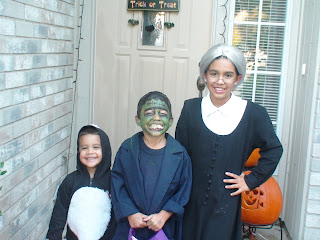 We started at around 6:20 and trick-or-treated all night until 8:30. The kids had so much fun, especially Roman, who was so excited that he was running everywhere and tripped multiple times, spilling his whole bucket of candy each time. Lots of people got a kick out of his costume. (I'm sure that wasn't influenced by the cute little face inside it....) I thought Roman would be the first one of the kids to get tired and want to go home, but it turned out that he had more stamina than anyone, and he wanted to keep going even when we finally came home. I could have gone all night. I enjoy trick-or-treating even more than the kids I think. They ended up with SO much candy. (Great for me because I can eat all the candy I want and they don't even notice a dent in it! Not so great for my thighs however....sigh...) It was a great night. 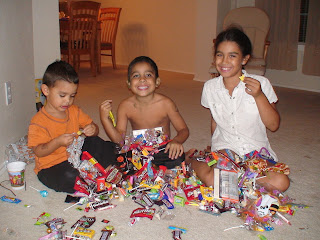